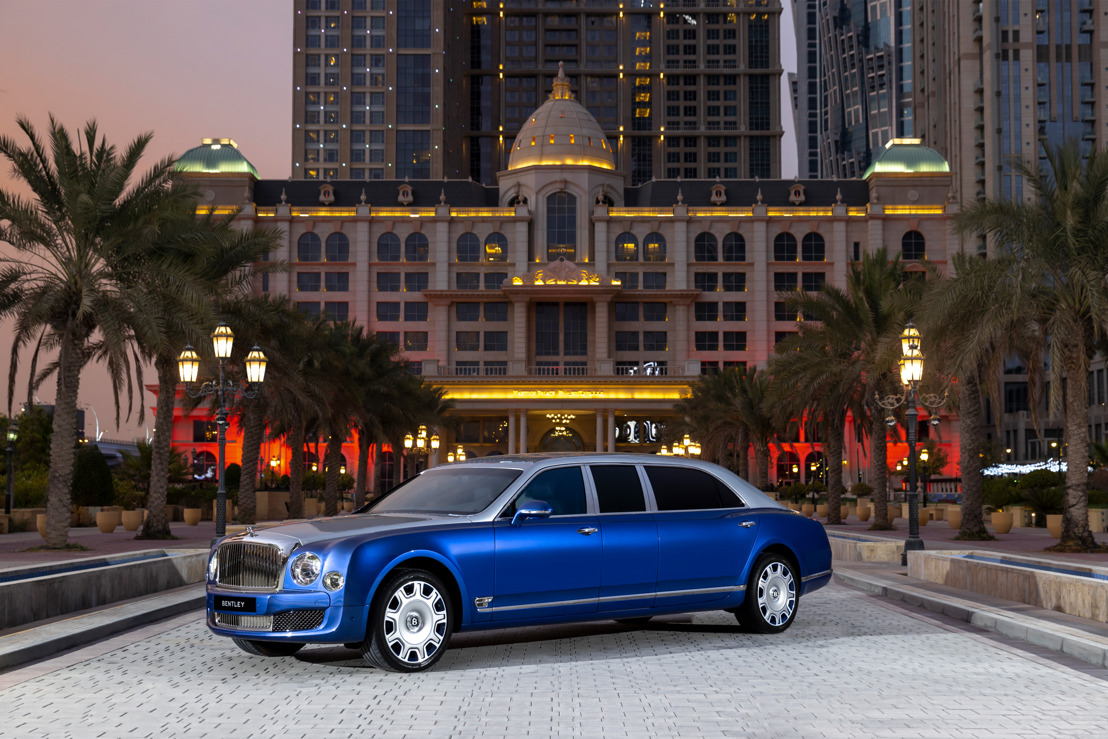 Bentley is offering customers a final opportunity to purchase a piece of automotive history - one of the British brand’s most unique and distinguished models, the Mulsanne Grand Limousine by Mulliner. Five examples of this rare, modern coachbuilt car, which was specifically designed for customers seeking the finest in luxury limousine transportation, have recently become available for purchase. These five cars were all built by hand by Mulliner in 2015, and shipped to their destination in the United Arab Emirates – but never used nor registered.

Designed and built entirely by hand, the Mulsanne Grand Limousine by Mulliner includes a 1,000 mm stretch to the body, as well as a raised roof to provide an additional 79 mm of headroom in the rear, to create a passenger experience like no other.

Originally created as a private commission, Bentley Mulliner was then given consent to build a limited run of cars for like-minded customers. Five of these have recently become available for purchase through Bentley’s retail partner in the United Arab Emirates, Bentley Emirates, with delivery anywhere in the world available as required.

The Mulsanne Grand Limousine by Mulliner is the ultimate demonstration of the extraordinary skills and abilities of Bentley’s in-house bespoke division. With production of the Mulsanne having ceased last year, these models represent a unique chance for customers to acquire an iconic piece of modern Bentley history.

The cars available for sale each have their own unique identities and specifications, to suit any taste:

The Mulsanne Grand Limousine by Mulliner was designed around the need for four passenger seats of equal comfort. Their arrangement, which was inspired by luxury private aviation, includes two rear-facing seats, allowing passengers to talk face-to-face.

Emphasising the truly luxurious travelling experience, a bottle cooler with crystal flutes sits between the front facing seats, with a beverage cabinet with bespoke crystal tumblers between the rear facing seats. Veneered, folding picnic tables allow the occupants to work comfortably on the move, with iPad docking and charging stations. Bentley craftsmanship is further evidenced by the three handmade dials, which display UK and local time, alongside the exterior temperature.

The finest materials have been applied throughout, utilising Bentley’s world-renowned skills with leather and wood, with the higher roof and extra length offering a true sense of space in which to relax. The Mulsanne Grand Limousine by Mulliner is truly the ultimate space in which to work or relax on the move.

A custom heating, ventilation and air conditioning (HVAC) system was designed and built by Bentley Mulliner, specifically for the Mulsanne Grand Limousine. With two discrete zones, it provides each of the four rear passengers control of their own micro-climates, without affecting the experience of their travelling companions.

Among the many additional bespoke digital features, the limousines are equipped with an intercom system for communication with the driver. The interior division between the front seats and the rear features electrochromic ‘smart glass’, the first time this technology has been implemented in a Bentley. At the touch of a button, the entire panel can be switched from transparent to opaque, for complete privacy.

As Sleek as it is Spacious

The stretched model sits on a chassis and suspension that were specially re-engineered by Bentley. Power is provided by Bentley’s iconic 6¾-litre twin turbo V8 engine, with 505 bhp (512 PS) and 1,020 Nm (752 lb.ft) of torque. Unique 21” wheels have been treated to match the car’s exterior paintwork, while even its stainless steel Flying ‘B’ bonnet mascot is a bespoke commission: its plinth is engraved with the words: ‘Coachbuilt by Mulliner’.

Perhaps most remarkable of all is the elegant profile of the car itself. Unlike traditional ‘stretched’ limousines, it has been carefully designed to preserve the Mulsanne’s effortless lines and aesthetic purity. The result is the longest manufacturer-built limousine in the world, its shape adapted beautifully to the length of its wheelbase.

Bentley Mulliner exists to respond to the requirements of Bentley's most discerning customers. From requests as simple as monogrammed upholstery to elaborate tailored body modifications, the highly skilled and dedicated Mulliner craftspeople deliver luxury and rarity on a different scale.

With almost 500 years of craftsmanship experience and heritage, Bentley Mulliner has three distinct portfolios: Coachbuilt, Classic and Collections. Mulliner recently celebrated its 1000th bespoke commission since its own dedicated design team was formed in 2014, when the increasing demand for bespoke and personalised vehicles was recognised.