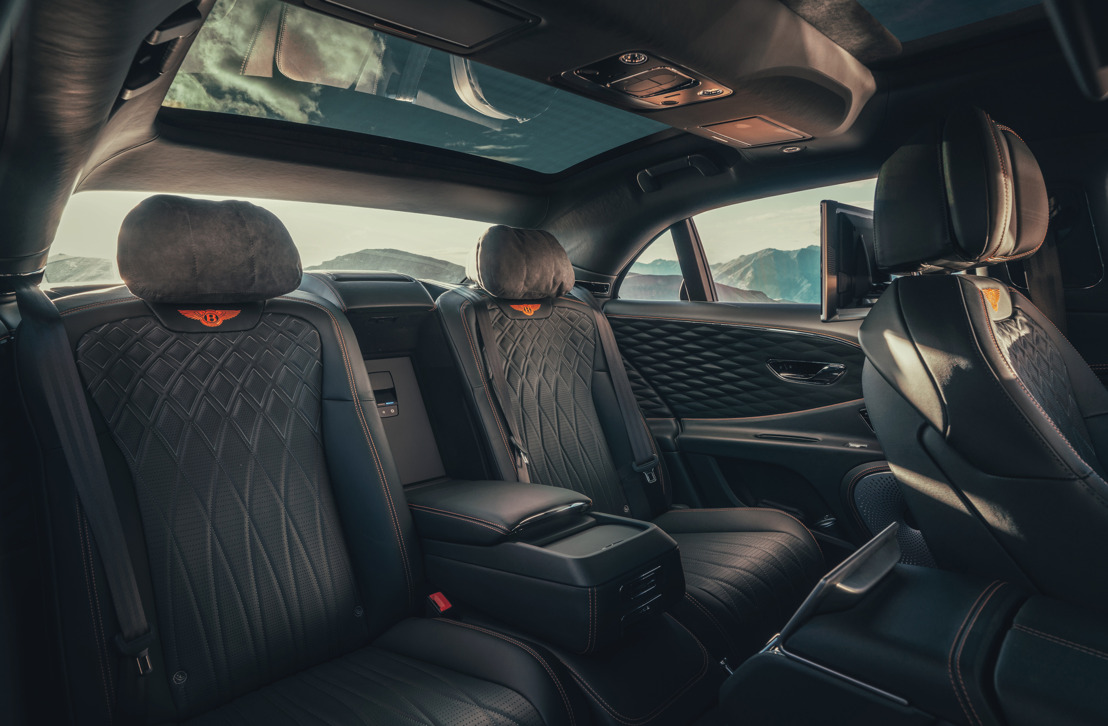 A range of rear cabin options for the all new Flying Spur showcases Bentley’s expertise in creating a modern cabin of unrivalled luxury and innovation. From the very start of development, the focus was on ensuring that passengers in the rear experience the same standard and quality as those in the front. Customers have the ability to select unique configurations tailoring the rear cabin to suit their desires and requirements.

Through a range of optional equipment including Rear Seat Entertainment tablets, audio options up to the industry-leading Naim for Bentley system and even the luxury of an onboard two-bottle drinks cooler, the rear cabin of the Flying Spur is the ultimate place to work or relax while on the road.

The new refrigerated bottle cooler can be found between the rear seats behind the centre armrest. With two levels of cooling from +6°C to -6°C and the ability to accommodate six 330ml soft drinks, four 500ml bottles or two full sized (750ml) champagne bottles, the cooler can be stocked to suit any journey. A completely new design means that the cooler is packaged into a much smaller space than the previous generation Flying Spur, meaning less intrusion into the vast 420 litre boot space.

“The interior of the Flying Spur is a striking combination of the very latest integrated technology, beautiful materials and design prowess. It is progressive but retains a timeless quality that will still be stylish and appealing for decades to come” comments Brett Boydell, Head of Interior Design for the Flying Spur.

Integrated Technology for Work or Relaxation

As the most advanced Bentley ever built, the Flying Spur is a fusion of cutting-edge electronics and artisan craftsmanship. It represents the very latest in Bentley’s forward-looking approach to technology; blending ease of use with exquisite design and functionality.

At the centre of the rear cabin, the multi-functional five-inch colour Touch Screen Remote can be found mounted in the rear of the centre console. At a press of a button the Touch Screen Remote glides from the console and allows the rear occupants to control many features including rear seat functionality, climate control, window blinds and even the movement of the Flying B bonnet mascot.

The rear seats offer 14-way adjustment and five massage modes, with key adjustments being made via door mounted switches. The rear outer seats are both ventilated and heated with electrically controlled headrests accommodating each individual’s personal preference.

Complementing the Naim For Bentley audio system, customers can also specify Rear Seat Entertainment, consisting of a pair of tablets located on the back of the front seats to give access to the Bentley Multimedia System. The removable 10.2” Android tablets have 4G, WiFi and Bluetooth connections for effortless, high-speed on-board connectivity and facilitate access to the Google Play store whilst having their own internal memory for media, downloads and the full range of apps.

Utilising the extensive specification offering, customers can choose between a selection of fifteen hide colours and eight different veneers to create an individual specification. Stitching and emblems can also be specified in blind or contrast colours, as well as the option of contrast piping to the seat covers - reminiscent of the original Flying Spur from the 1950s.

“We wanted to take our tradition of quilting and push the envelope by moving the game on to the next level. The introduction of 3D leather quilting was a ground-breaking process – a totally fresh idea that had never been seen before” says Boydell.

To maximise the visual impact of the materials used throughout the cabin, an optional panoramic glass sunroof can be specified, flooding the interior with light and emphasising the design lines that flow from the new fascia connecting the front and rear passenger area.

The new Flying Spur already offers the most customisable, comfortable and technology-driven cabin of any Bentley. The process of pushing the boundary never stops, and to ensure customers’ expectations are continually exceeded, more options to enhance the rear cabin even further are in development and will be revealed soon.

Bentley Motors is the most sought after luxury car brand in the world. The company’s headquarters in Crewe is home to all of its operations including design, R&D, engineering and production of the company’s four model lines, Bentayga, Continental, Flying Spur and Mulsanne. The combination of fine craftsmanship, using skills that have been handed down through generations, alongside engineering expertise and cutting-edge technology is unique to UK luxury car brands such as Bentley. It is also an example of high-value British manufacturing at its best. Bentley employs around 4,000 people at Crewe.