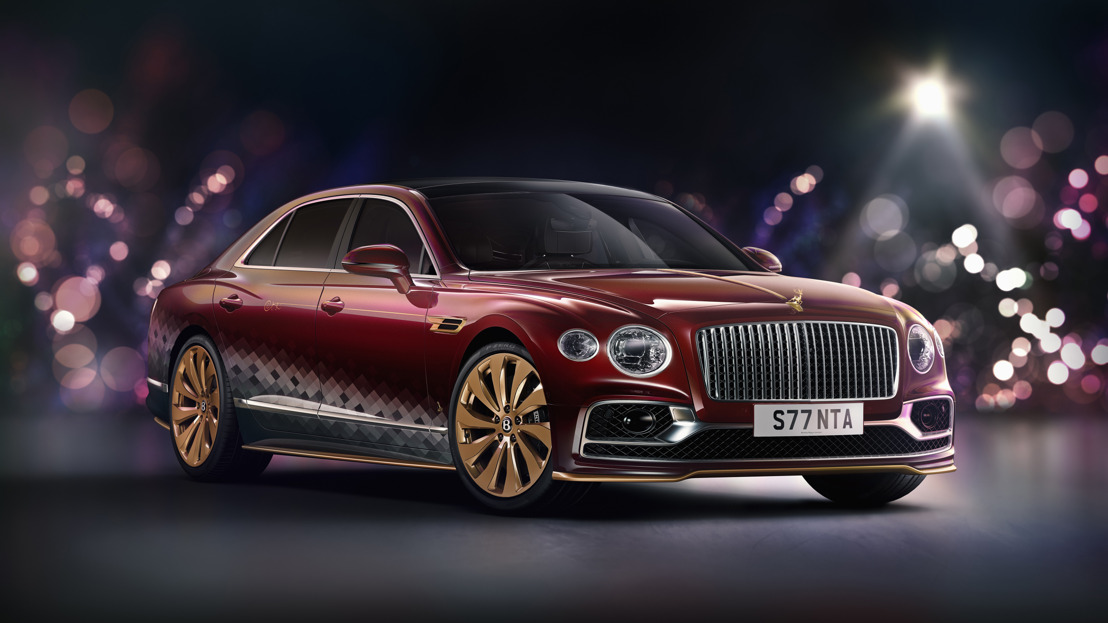 A world famous customer has worked with Bentley’s bespoke and personal commissioning division, Mulliner, to upgrade his flying sleigh to something a little more luxurious and special: a unique, festive Flying Spur V8 called the ‘Reindeer Eight’.

Bentley Mulliner has a rich history and expertise of fine craftsmanship and visionary design. Its mission is to respond to the requirements of the most discerning Bentley customers through unforgettable bespoke cars.  And with the customer’s own global and extensive list of expectant fans, this commission was one of its most important yet.

“What fun it is to ride in a 542 horsepower sleigh. Plus, there’s space in the back for all my subordinate Clauses.  I’m looking forward to putting 41 million miles on the clock before the end of the year,” said the bearded customer.

The one-off ‘Reindeer Eight’ is finished to the exterior in deep red Cricket Bauble paint finish, a unique shade created for the customer based on Cricket Ball which is available as one of the 62 shades offered by the Extended Range.

Leading the car from the front, a gold three-dimensional printed reindeer can be found in lieu of the Flying B mascot, and to the sides the V8 badges have been replaced by a special ‘Reindeer Eight’ badge signifying the powertrain the customer is more familiar with. A spokesperson for the company would not comment on speculation that Rudolf has lodged a complaint with his union, Silent Unite.

Following the lead reindeer, the standard chrome bonnet strip has been re-trimmed in gold, and coordinating hand painted fine line details shimmer from the rear of the Bentley wing badges.

To emphasis the speed and performance required to cover the significant distance by the owner, a gold styling specification has been included, comprising of a carbon diffuser to the front and rear bumper, carbon side sills and a boot lid spoiler – for maximum aerodynamic performance at cruising altitude. The Mulliner Driving Specification with 22” golden wheels and diamond finish, representing the snow peaks crossed, completes the exterior theme.  Given the cold climate of the customer’s primary residence, All Season tyres have been fitted.

The ‘Reindeer Eight’ continues to build on the latest Flying Spur model released with a more driver-centric experience via increased agility and a more characterful powertrain, whilst benefiting from increased range between fuel stops – vital to complete a lap of the world in one night.

The interior of the ‘Reindeer Eight’ showcases Bentley’s expertise in creating a modern cabin of unrivalled luxury and innovation, capable of comfortable seating for four or five.  Extensive testing by members of the Mulliner team confirmed that this was also possible after uncontrolled mince pie and consumption.

The customer has specified a monotone Cricket Bauble interior with gold personalised embroidery and hand cross-stitching, including his name stitched into the driver’s seat and that of his wife alongside. The customer hasn’t confirmed whether “Mrs C” will be allowed to drive.

Sweeping horizontal veneer flows across the dashboard and into the doors, emphasising the spacious width of the cabin. At Mulliner’s suggestion, the Grand Black veneer displays a North Pole winter night scene with inlays to fascias and door waistrails to depict the end of the night’s journey.

The seats of the ‘Reindeer Eight’ feature a twin-flute design and increased functionality, including heating, ventilation, multi-mode massage, adjustable bolsters and top tilt which should keep the customer alert yet relaxed over the extensive mileage that he will be covering. With the Mulliner Driving Specification chosen by the customer, the new three-dimensional leather combines with traditional stitching and embroidery work.

Festive gold hand cross-stitch highlights the attention to detail and skill of those working at the Bentley factory in Crewe.  It takes 18 hours for an elf or craftsperson to complete the 11,100 hand sewn stitches throughout the cabin, and consumes 115m of special thread (equal to the height of Big Ben).

The industry-first Bentley Rotating Display features in the ‘Reindeer Eight’. When the engine start button is pressed, and after a welcome sound of sleigh bells jingling, ring ting tingling, the veneer section in the middle of the dashboard rotates to reveal a 12.3-inch touchscreen, displaying multiple menus. A Naughty and Nice list integrated in to the navigation system allows the customer to quickly know whether his fans have been bad or good – so be good, for goodness’ sake. The second side of the display reveals three elegant analogue dials showing outside temperature, a compass (vital for the customer to find home at the end of the long work night) and a chronometer. Finally, the third side offers the seamless Grand Black veneer fascia, continuing around the cabin, representing the North Pole winter night scene.

The Bentley Communications team wishes all of our media friends a very merry Christmas and a relaxing and restful break. See you in 2021.