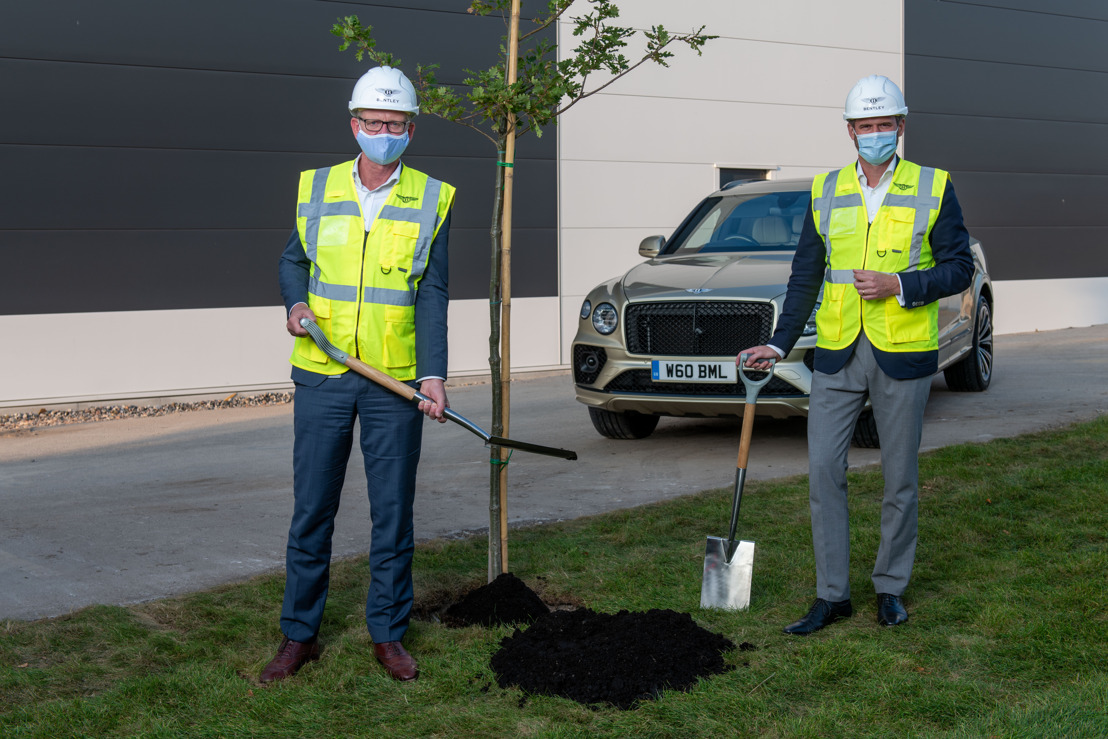 )  A new state-of-the-art engineering test facility, built at the headquarters of Bentley Motors in Crewe, UK, is nearing completion following an official ‘topping out’ ceremony. In place of the traditional final beam marking the occasion, a native British Oak tree was planted by Members of the Bentley Board for Manufacturing and Engineering, laying down roots for the future.

The engineering test facility is the latest phase in on-going development at the Pyms Lane site where all Bentleys are handcrafted.     With topping out traditionally celebrated with the final construction beam being fitted, Bentley instead planted a tree to signify the company’s continued commitment to increasing sustainability and developing biodiversity around its site in Crewe.

Fresh from planting the tree personally, Dr. Matthias Rabe, Member of the Board for Engineering, commented:

“This new facility will further enhance our already industry-leading, modern factory headquarters and will enable us to grow as we look towards the electrification of our model range. Additionally, and crucially, it will allow us the independence to test our own engines as we rapidly accelerate our journey towards electrification.”

Peter Bosch, Member of the Board for Manufacturing, and also joint tree planter, added:

“At the same time, it reinforces our focus on the environment, having already planted 100 trees in the past year, (not all personally I hasten to add!), as we look to become a biodiversity role model and lead sustainable luxury mobility in the future.”

The facility will complete full internal construction and open in 2021, covering more than 4,600 square metres over two storeys. Included is 773 square metres of office space and 1,550 square metres designed for the installation of a single climate-controlled chassis dynamometer, operating across a range of temperatures from -10°C to +40°C.

There will also be a dedicated laboratory to run Real Driving Emissions (RDE) using the latest state-of-the-art portable emissions measurement systems. Bentley’s Technical Conformity department will be based in the test centre, with over 100 people working in the building.

The centre will allow Bentley to meet increased consumer demand for its current range of ultra-luxury vehicles, including the performance-orientated Flying Spur, the Continental GT and the New Bentayga. The launch of the first generation Hybrid SUV marked Bentley’s first step towards electrification, with more to follow.

The facility will play a key role in Bentley’s journey to become the world’s most sustainable luxury automotive manufacturer, giving the business capacity to grow as it diversifies into hybrid and electric models. The British marque has already confirmed that it will offer hybrid or electric variants of all of its models by 2023.

It will allow Bentley to carry out the latest WLTP fuel and efficiency test procedures more swiftly in-house.

Environmental considerations lie at the core of the new building, in line with the company’s sustainability approach, which aims to promote biodiversity and create a greener site environment.

As part of the 100 trees planted on site in 2019, there were ten oak trees which sit outside office buildings and 15 cherry trees which line the approach to the company’s main entrance on Pyms Lane. A further 70 trees which include maple, beech, walnut, lime and elm saplings, have been planted along the boundaries of the Legends social facility.

Additionally, as part of the construction of the engineering test facility, Bentley safely rehomed 10 fruit trees to the neighbouring site of its flagship showroom concept, CW1 House.