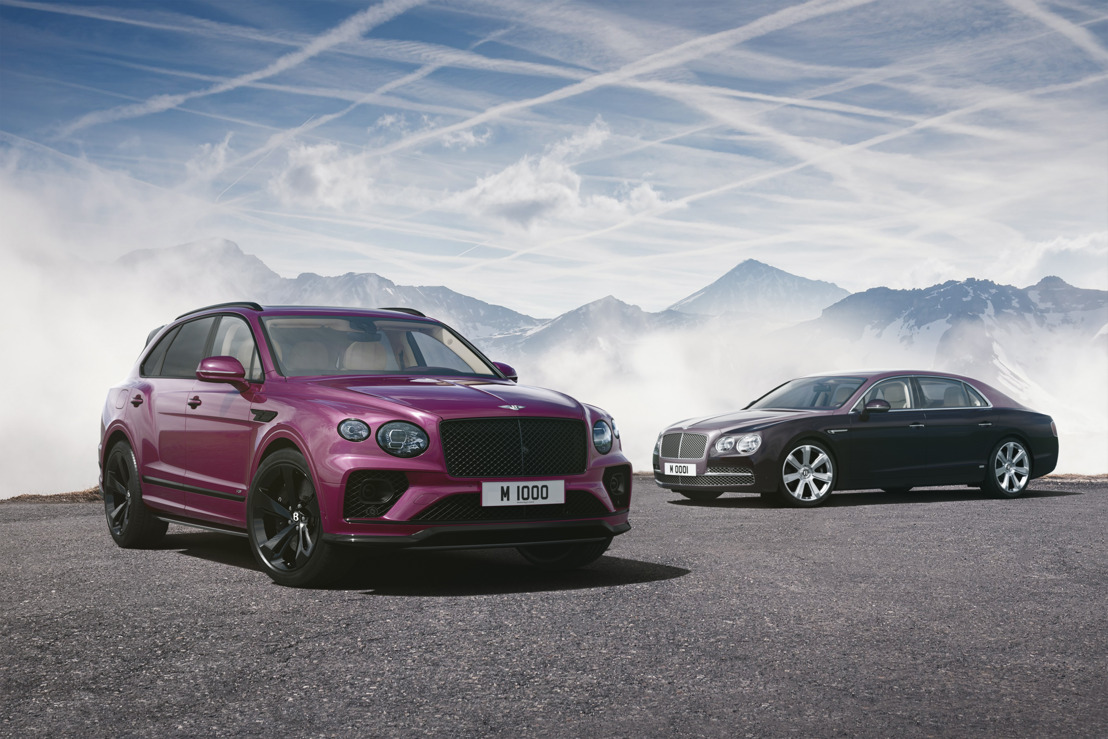 Bentley Mulliner is celebrating its 1000th bespoke commission since its own dedicated design team was formed in 2014, when the increasing demand for bespoke and personalised vehicles was recognised.

The 1000th bespoke project is for a European customer who wanted two specific interior features to extend the personalisation of their Bentley. The first request was the application of Olive Ash - a veneer associated with the heritage of Mulsanne - to the interior of a Bentayga. The second was to introduce a contrast twin stitch to the upper areas of the seats and door trims adding further contrast to the interior.

Seven years earlier, the first project was a small limited edition of 15 vehicles which focused on increased levels of passenger comfort - the Flying Spur Serenity. The seats and headrests were re-engineered and as part of the broader redesign a new and unique diamond quilting throughout the cabin was introduced to create a truly bespoke feel. This unique textured leather formed the inspiration of the diamond design that can be seen in the current Continental GT Mulliner today.

In celebrating this project milestone, the Mulliner Design team has shared some of their favourite examples from the last seven years. Their work spans the entire Bentley model range over that time – from jet-fighter inspired Continentals, to Mulsannes that celebrated its 6¾-litre V8 engine, and even a Bentayga that had different interior trim specifications between the driver and passenger sides.

The 1000 bespoke projects since 2014 range from personalised, bespoke treadplates all the way to completely unique and Coachbuilt projects like the Bentley Mulliner Bacalar, and include regional and global commissions, limited series and even race cars designs.

The specialist team, itself part of the Bentley Design department, consists of designers and digital artists to create the perfect blend of impeccable design with the ability to produce photo-realistic renders of customers’ designs before orders are placed. This single team, responsible for every Mulliner-designed product over the last seven years, has allowed for a deeper integration of core Bentley design DNA into Mulliner products while also expanding the scope of possibility to the customer.  The Mulliner customer of today is now only limited by two constraints – their imagination and the law.

The Mulliner Design offering is a core part of Bentley’s Mulliner portfolio strategy, with the team working across all three parts of Bentley’s bespoke and personalisation division. The team led the 12 customers of the Bentley Mulliner Bacalar through their design choices over Zoom during the pandemic, helped guide the 12 clients of the Blower Continuation Series in their specifications, created the Mulliner versions of the Continental GT coupe and convertible, and also define and issue the Mulliner Personal Commissioning Guide that affords every Bentley customer the option to add any level of bespoke detailing to their car. Their involvement in all areas of the Mulliner department – from Classic, to Coachbuilt, to Collections – has made the team the cutting design edge of what Mulliner can deliver.

The low-volume nature of Mulliner’s work also brings additional freedoms to the design team, which works closely with the rest of Bentley Design to develop new ideas and concepts that would not be feasible for series production Bentleys. A key example of this work is the range of Mulliner stone veneers, which can only be sourced in small quantities due to the exceptionally intricate and difficult manufacturing processes involved in shaping and finishing a sheet of stone less than a millimetre thick.

“Since 2014, our Mulliner Design team has averaged three customer commissions a week, showing just how popular bespoke Bentleys are becoming. The team, led by Design Manager Phill Dean, has worked on everything from Continental GT3 liveries all the way up to the specifications and details of the 12 cars of the Blower Continuation Series. The only thing all of those designs have in common is that they are for individual customers – apart from that, each one is as unique as the rest. The scope of what’s achievable with a standard production Bentley has now been brought to life by the team through the use of the dedicated Mulliner visualiser, which allows our customers to choose the colour and trim specifications of their cars with real-time photorealistic visualisation of the result. The co-creation process with Mulliner designers is now available to everyone.”

An Astonishing Range of Accomplishments

Customer commissions have included unique veneers, some of which included bespoke inlays, and eye-catching combinations of vibrant leather colours combined in individually-designed colour splits. Custom-created and fully bespoke stitching and embroidery features in many personal commissions, as do personalised treadplates and welcome lamps. Different materials that have been selected include various personal tweed designs, the use of stone veneers in lieu of wood, and even the inclusion of small artefacts from Bentley’s past.

Some commissions have been created as series of cars, often allocated to a single-digit number of lucky customers. A series of seven cars celebrating the famous Breitling Jets aerial display team were colour-matched to the aircraft that inspired them, finished in black, silver and yellow. Regional editions can be for specific retailers or customers, or celebrate a Bentley success – like the Continental GT Pikes Peak edition cars created in 2019 to celebrate Bentley’s Production Car record at the Pikes Peak International Hillclimb.

The talents of the Mulliner Design Team extend beyond the cars themselves, from feature content within, to scale models and design-themed sculptures. The team were instrumental in the creation of the exquisite optional picnic hampers for the Bentayga, complete with refrigerator, bespoke fine china cutlery, crockery and crystal glass, and storage area for dry goods. For comfort in the great outdoors, the hampers themselves could be removed and used as seats.
Customers of the Blower Continuation Series and the Bentley Mulliner Bacalar have also received personalised “speedforms” of their cars in advance of taking delivery of their commissions, each one created by Mulliner to recreate the individual specifications.

With Bentley Mulliner now building cars across all three of its portfolios, and its Personal Commissioning Guide expanding with even more ways for customers to create bespoke Bentleys, the Mulliner Design team are set to be even busier in the months and years to come.