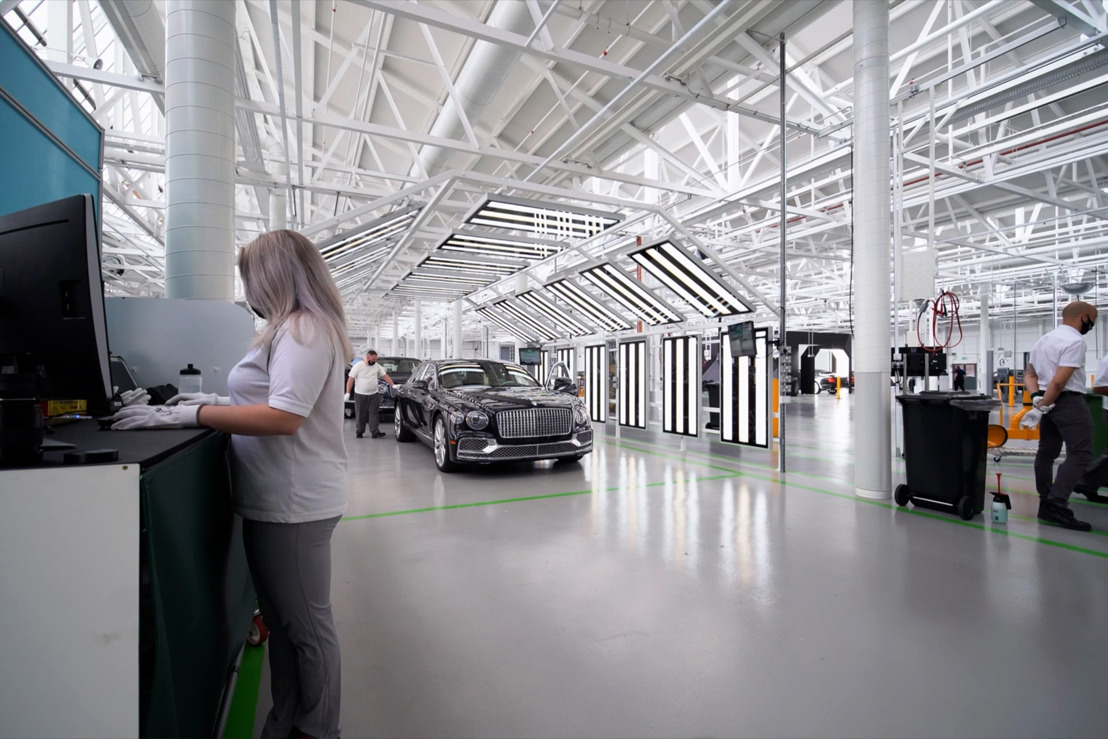 Bentley Motors today certified for delivery its first car from a new, dedicated Excellence Centre for Vehicle Finish at the company’s celebrated factory in Crewe, England. Board Member for Manufacturing, Peter Bosch, drove the first car – a Bentayga V8 – off the line, as part of a celebratory ceremony for colleagues on site.

Following its meticulous production process, which combines traditional craft and state-of-the-art technology, every Bentley will now be finished in the new facility by a team of hand-picked craftspeople. Only upon meeting their exacting standards can it be signed off for delivery to Bentley’s customers around the world.

An accredited Top Employer for over a decade, Bentley has given enhanced training to each colleague – over and above the comprehensive development journey every production team member goes through.  Depending on model, colleagues complete a 500 to 650-point checklist that takes more than two hours to complete, with 20 cars a week undergoing an even more comprehensive quality audit to continually drive quality standards.  The result of this historic passion for quality is the fact that more than 80 per cent of all Bentleys ever made are still on the road. A display of heritage Bentleys in the new facility serves to remind colleagues of the legacy they create when releasing a car to a customer.

The new facility is based in the former Mulliner workshops where for decades the most secret bespoke Bentley’s were created. Later, the building was transformed into a dedicated production line for the legendary Mulsanne, itself the epitome of quality and excellence. Reimagined today as the Excellence Centre for Vehicle Finish, the modern, digitally-enabled facilities optimise processes – allowing Bentley to meet unprecedented global demand for its product range today, while future-proofing the brand for evolving vehicle technologies.

Commenting on the opening of the new facility, Peter Bosch, Member of the Board for Manufacturing, Bentley Motors, said:

“Every Bentley model has always been hand-built and checked to the very highest standards. The new Excellence Centre for Vehicle Finish takes our meticulous standards even further.  Colleagues wear white gloves to ensure that our hand-built cars leave the facility without so much as a fingerprint on.  Their skill and passion is supported by digital innovations such as Artificial Intelligence, to ensure our current and future cars will continue to meet our customers’ high expectations.

“The investment in the facility is the latest step in our site transformation as we build Bentley for the future, reinventing our factory to prepare for the next stage in our growth. Our collaborative modern campus – as a carbon-neutral, innovative, low environmental impact site – plays a key role in helping to deliver our Beyond100 ambitions.”

Bentley’s ground-breaking Beyond100 strategy will see Crewe factory operations (already carbon neutral) becoming carbon positive by 2030.  It was the first UK automotive plant to achieve both the ISO 14001 environmental standard, and the ISO 50001 energy management standard.  Bentley was also the first UK automotive manufacturer to be awarded the triple Carbon Trust Standard for carbon, water and waste reduction with the factory becoming fully carbon neutral in 2018.