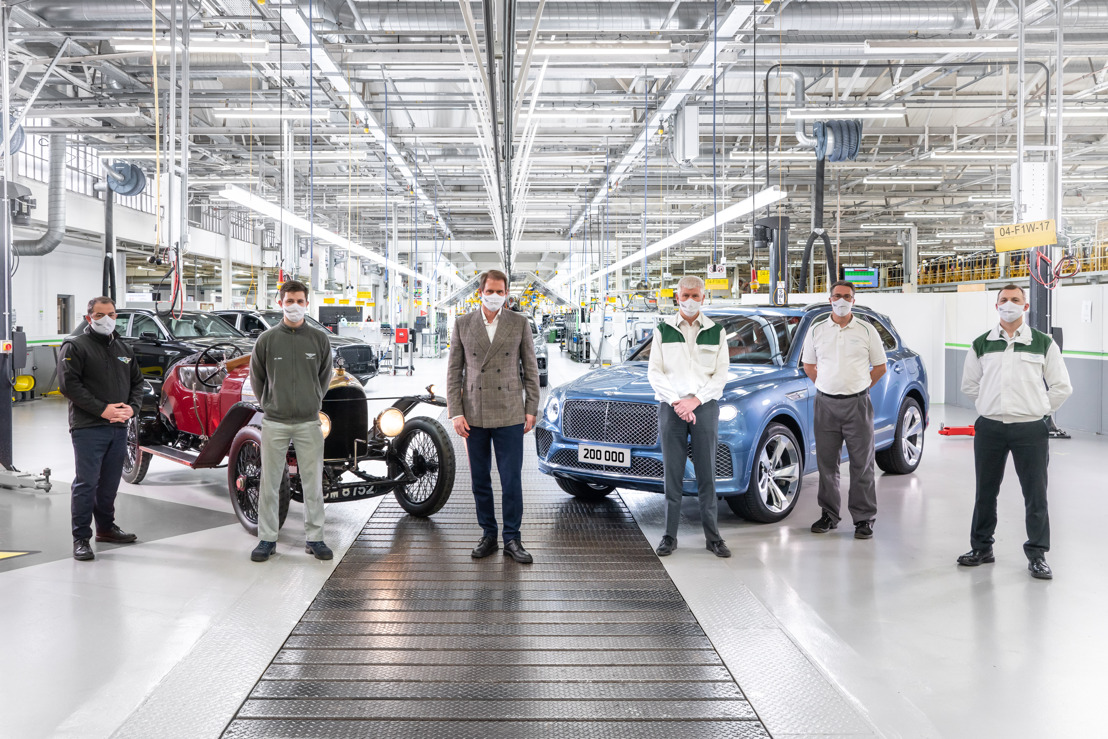 Bentley Motors has celebrated the 200,000th luxury car built in the company’s illustrious 100-year-plus history. The Bentayga Hybrid, destined for a Chinese customer, met the oldest surviving Bentley, EXP 2, and a number of long serving colleagues, as it rolled off the production line at the home of Bentley in Crewe this week. This crowns an extraordinary 20-year period in which the success driven by modern day models such as the Continental GT and Bentayga has truly changed the face of Bentley Motors.

The manufacturing milestone is even more remarkable when considered that the 200,000th car is the latest in 154,396 vehicles built at Crewe since 2003 – the breakthrough year the Continental GT was originally launched as the first model of the modern Bentley era. Today, Bentley is building 85 cars per day, the same output in one month two decades ago.

In comparison to Bentley’s modern era, in the year of Bentley’s first existence, 1919, through to 2002, the company built 44,418 luxury cars – 38,933 of them in Crewe. Among that total were many iconic models of their time, including the Bentley Blower, the R-Type Continental, Mulsanne, Arnage and Azure. Incredibly, records show that 84 per cent of all cars built for the UK market are still on the road today.

A major investment programme at the Crewe factory since 2003 has gone hand-in-hand with the success of the Bentley Continental GT, the definitive luxury Grand Tourer. The 80,000th individual, made-to-order example was built in January this year.

“This production of the 200,000th car is just the latest landmark on the extraordinary journey that Bentley has been travelling since its foundation in 1919. In 2003 the introduction of the Continental GT represented a transformative moment for the brand, and this Bentley alone, has represented 80,000 sales of our total 200,000, and created both a new segment, and a contemporary image foundation for the Bentley business.

“The pace of progress has accelerated significantly since 2003 and we are now entering the next period of transformation as we pursue our Beyond100 strategy, with the aim of positioning Bentley as the global leader in sustainable luxury mobility.”

To witness the landmark moment, the Bentayga Hybrid and EXP 2, were joined by Bentley’s longest serving colleagues, including Steve Ward, who joined in 1977, and followed in his father’s footsteps, his own Bentley career beginning 42 years earlier.

In his role as Whole Vehicle Analysis Engineer, Steve has had an active involvement with every Bentley model since 1980 and has tested them throughout the world, witnessing first-hand the transformation in modern-day Bentley cars.

The Continental GT is the ultimate in high-speed luxury and remains the benchmark in its sector. This week (March 23) also saw a new Continental GT revealed – the most capable, performance-focused Bentley yet, the Continental GT Speed offers no compromise to comfort or luxury.

The success of the Continental GT has been mirrored by the Bentayga, offering a true Bentley driving experience and unparalleled luxury. Launched in 2015, when it established the luxury SUV sector, the fastest SUV in the world has reached its 25,000 production landmark. It is expected that the Bentayga could surpass total sales of the Continental GT within a decade and become the biggest selling Bentley model in history.

Since 2005, the company has also built 40,000 examples of the Flying Spur, the most successful luxury sports saloon in the world.

Looking to the future, the ambitious plans Bentley Motors has for car production were outlined in November 2020, with its ground-breaking Beyond100 strategy. The company aims to be end-to-end carbon neutral by 2030, with the Crewe factory climate positive thereafter.

Bentley will move to full electrification – PHEV or BEV only – by 2026, then switch the entire model range to battery electric vehicles by 2030. The industry-leading Beyond100 Strategy will transform every aspect of the business as Bentley accelerates into its second century of luxury car production.