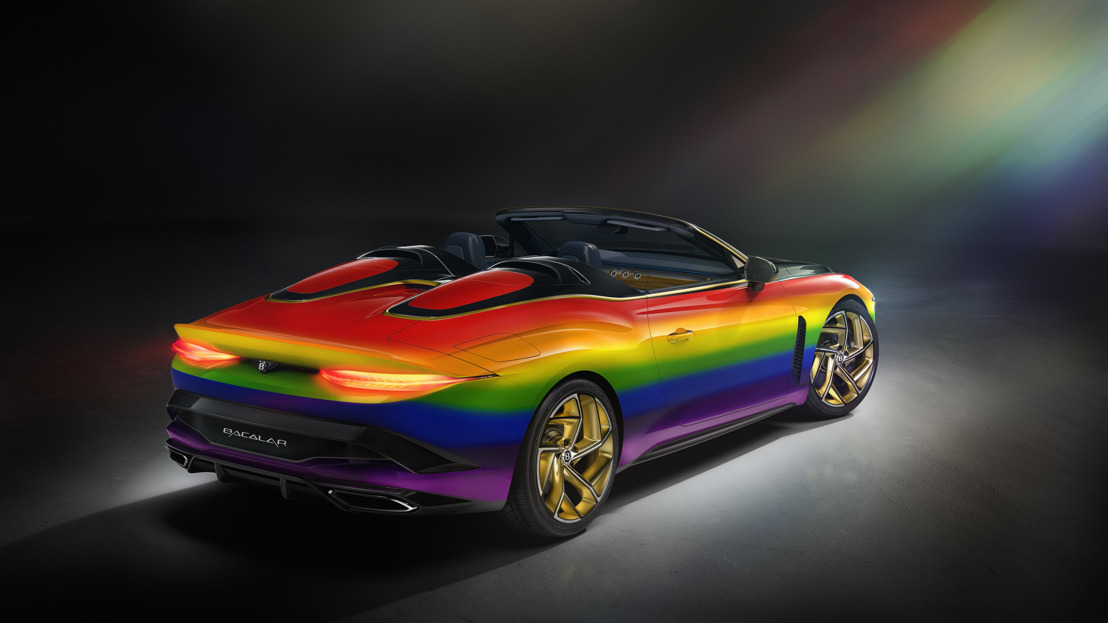 Bentley has defined two versions of the symbol of hope during the Covid-19 crisis – the rainbow – through seven of its own vibrant paint colours available as part of Bentley spectrum, and a unique Bentley Mulliner Bacalar.

A recent online competition for Bentley colleagues and their families to design their own Bentley Mulliner Bacalar resulted in a beautiful rainbow-themed winner. The extremely rare and exclusive Barchetta-style Bacalar relaunches true coachbuilding at Bentley Mulliner, and while real-world production is limited to just 12 cars, anyone is able to imagine their dream specification from Bentley’s unrivalled spectrum of interior and exterior colours. Judged by Bentley’s Director of Design, Stefan Sielaff, a winner was selected for both the exterior and interior. The exterior winner was Eleanor, whose vibrant rainbow-themed concept reflected the current situation with a symbol of gratefulness and hope.

As Bentley starts its recovery and continues to support the community, its own version of the rainbow can be created from a paint range as diverse as it is extensive. From rich reds through vibrant mid-tones through to energetic blues and purples, these are the seven colours that make up the Bentley rainbow:

Dragon Red II: An arresting and distinguished metallic red, evoking a sense of speed and presence. The first iteration was used to launch the original Continental GT V8 in 2012, and in its second version Dragon Red II remains a deep and rich colour regardless of the tone of the light that illuminates it, and was used as the launch colour for the Bentayga V8.

Orange Flame: Orange Flame matches other vivid palette colours such as Citric and Magenta in its ability to make the boldest of statements. Mixed with Mica pigment and powdered aluminum, Orange Flame is painted in a single layer, topped with a clear coat, cured and then finished with a 'mirror finish' polish. It provides exceptional contrast across the muscular curves and sharp lines of the Bentley range, and was used to launch the Bentayga Speed.

Yellow Flame: A unique colour created for the recently launched, limited edition Bentley Mulliner Bacalar – Bentley’s return to coachbuilding – providing an incredibly striking example of how the luck 12 Bacalar customers could specify their car. Using a ‘colourstream’ pigment containing rice husk ash, a byproduct of the rice industry, this specially developed paint reflects a striking transition of colour that intensifies the drama of the form and contours of the Bacalar exterior.

Apple Green: A fresh, modern hue in the green spectrum, Apple Green is a bespoke Bentley colour that provides a striking pop of confident colour.

Jetstream II: A light, very fine, almost powder blue metallic finish that can transition between a cool silver in warm light to and a soft, elegant blue in cooler light. Both sporting and luxurious, this shade is perfect for those looking to make a bold statement and pairs incredible well with Bentley’s Blackline Specification, replacing exterior chrome brightware with black versions.

Sequin Blue: One of Bentley’s most iconic colours, Sequin Blue was originally a special request from a customer to match the colour of a sequin from her favourite ball gown. This is a bespoke rich metallic blue with a deep shadow and ‘flop’ (how a metallic paint reflects different amounts or hues of light depending on the lighting angle), and has a sumptuous fluidity and unrivaled ability to draw attention to the exterior shape and form. Sequin Blue launched the third-generation Continental GT in 2017, and is one of the top 10 most popular paints for customers.

Azure Purple: Azure Purple is a dark, rich shade with blue undertones which was created when Bentley was asked to match the unmistakable colour of the beautiful African Violet flower. A confident and flamboyant colour, it has been used by customers of both Bentayga and Continental GT.

Bentley’s rainbows come at a time of cautious optimism as production in Crewe resumes. Meanwhile, 3D printing machines are being used to produce more than 30,000 face shields, entirely manufactured on-site in Crewe, destined for the care sector in Cheshire and including all 95 care homes, the NHS and local community services. Bentley is also donating personal protective equipment (PPE) such as gloves (more than 20,000 pairs so far), facemasks, safety glasses and seat covers. Furloughed colleagues have also extended the Bentley ‘Meals on 22 inch Wheels’ service, with volunteers delivering food parcels and vital medical supplies in the community.